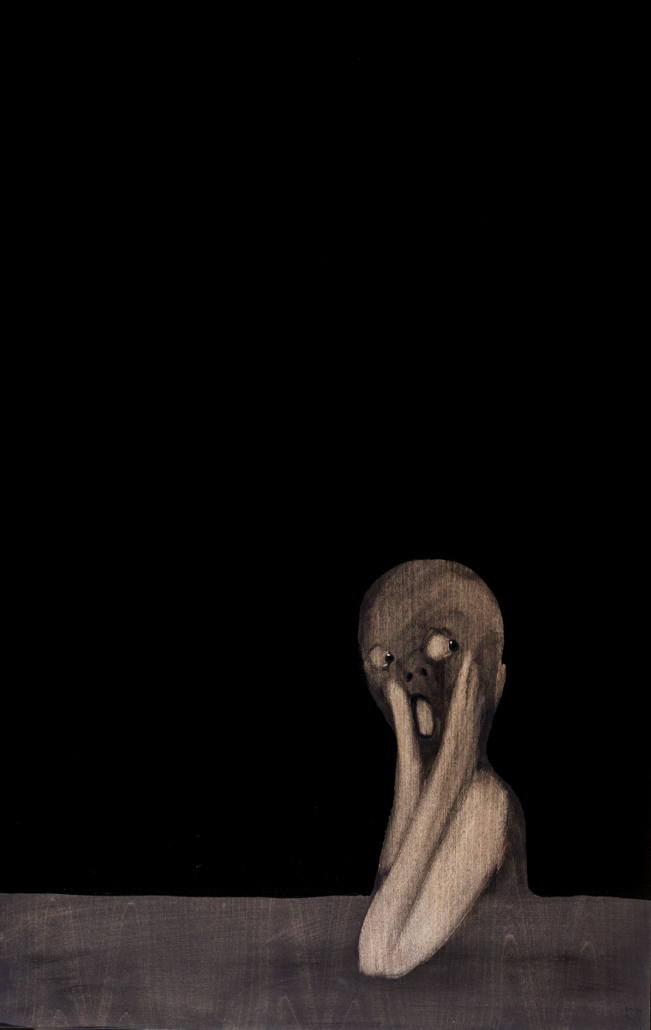 The Figural as Artistic Language
One work in the exhibition stands out as dubiously sculptural: Nocturno de Apalancados(«Night of Leveraged»). This composition of a large number (100) of images on acrylic fixated on wood, each measuring 80 x 110 x 2,5 cm, is emphatically different from the other works in the exhibition. Its surface is quite large, 6,5 m x 14,5m x 2,5 cm.By all accounts, these images are flat. They are paintings, rather than sculptures. As paintings, they have perspectival depth, the figure being glued behind a depicted table, from which they cannot be distinguished. Rather, they seem to emerge from the table top, which thereby becomes simply another plane, rivalling the flat paintings. However, their materiality questions that flatness in a variety of other ways. First of all, they are installed in a chapel, which gives them a spatiality that is different from painting hung on a flat wall. The small chapel with its semi round arch above suggests a depth that is different from the depicted one in the paintings. This depth is materially there: one can see the bricks that make the walls protrude, and the niche recede. Also, their seriality differentiates them from the usual uniqueness of paintings. Again, as with the sculptural installations, it takes a second, longer and closer look to see the differences among these paintings. Once we take, or give them that time, we notice that all these figures, or busts, harbour frightened faces, open mouths, eyes looking sideways as if to compel us to follow their gazes and see where the danger lurks. The hands are actively pushing the head into a knot, as if incapable of staying straight. But then, they are not identical at all. For, most importantly, these hundred figures, similar and different, are all hand-made, painted with the artist’s fingers. That mode of painting leaves a trace, a finger print, which adds a layer to the spatiality of the installation. A finger print is an index, which points to someone else, now absent, but whose trace remains embedded in the layer of pigment.
Through these material and spatial details, this work participates in what I have contended above Rico’s sculpture does: raise questions, confuse our preconceptions, compel bodily as well as affective movement, and activate our wish to understand. But that understanding is not an intellectual exercise (only). Here, I consider the aesthetic aspect of this art. Integrating body and mind, this worksolicitsan understanding in the aesthetic sense as developed by mid-eighteenth-century philosopher Alexander Gottlieb Baumgarten. To squeeze a 900-page treatise written in Latin into a single sentence: for him, aesthetics is based on an experience of three aspects: 1) binding 2) through the senses 3) in public space. These three aspects work together. This view contributes to the value of, specifically, exhibitions as the arena of the thought-image of the contemporary. Baumgarten published his Aesthetica in 1750. Aesthetic: rather than an academic philosophical discipline, which was Baumgarten’s context, I am taking it on as an effect-/affect-oriented, shared experience. An art exhibition would then be the most characteristic instance of a site where such experiences are facilitated. But the condition for this to happen is the effectivity of the art as aesthetic in Baumgarten’s triple sense. In this respect, the sensorial aspect of his view of aesthetics is key. This is why I began this reflection with the idea of active, hysterical material. The disgust that the self-portrait of El Soplador seems to emanate is not an expression of disgust but an effect that cannot leave the viewer indifferent; an affect. Similarly, the hundred figures in Nocturno de Apalancados do not express but convey their terror….