Some thoughts are so strong that they can be found sticking to the skull even after death. Their fossilised traces survive as just another element of the bones, as their substantial and primary elements at heart. There are people who can only be explained by an obsession, a childhood trauma, an emotional catastrophe that sculpted the soul down to the very last fibre. It may seem pure reductionism, yet in fact, this is a quick spiritual x-ray. Thus, began the Sermon on the Mount entitled Noctilucos [Nocturnal luminescence] by Lidó Rico (Yecla, Murcia, 1968) at Espai Quatre, which stripped down the entire terrible scene of human suffering, whose maximum penance comes from the hand of that religion which manages to extend punishment far beyond the line of death. Hence, the magnificent circle of skulls that opened the exbibition, including a thought detained by the warning light of the “always never’: stammering towards the outdoors in search of light, establishing the thesis that endorses the eternity of punishment, suffering and the work of art that achieves a renewed catharsis.

In the following scene, an insect appeared next to the thought in each skull’s central cavity, clearly a reference to the secret of amber and the un usual weight of Vesuvian death, which, as in Pompeii’s case, captured everything by chance, thus offering no opportunity whatsoever for imposture, for preparing the ceremony of the model for posterity. The truth has been captured from behind by death and here is what it chooses: an obsession for what will characterise the fossil for eternity, the memory of the being who may not have anted that fate. Punishment upon punishment, amplified suffering, that panic of the acccident that may have an indecent eternity in store for us was presented by Lidó Rico with masterfulness and a lack of mercy, as is typical of him and his extraordinary work.

Yet, the bulk of the artist’s proposal for Palma was exhibited in Espai Quatre’s very womb, where no light can exist. With that premise, Rico played there with pigments on the polyester resin out of which be customarily fashions his pieces, many executed with he himself as a mould to obtain the effect of light
that expands from bodies once night falls. Pieces that devoured light and later vomited it, as if they were beacons to the doors of the hell that lives within us, that inner hell that will be fossilised as our perpetual image after death.

An intervention in the cellar’s most voluminous gallery -in the style of those on the rear wall of a church’s main altarpiece flooded with incendiary votive offeringsleft no room for doubt: suffering is the only thing that never dies, be cause its traces cross over death’s squalid threshold. A terrible, yet supreme truth in the end.

Lidó Rico’s work lies halfway between sculpture and intervention, although in many cases, the reference to the flatness that the painter starts from is highlighted, despite the relief with which he works. One might say that he concentrates the force of the architectural space in which his work is located in the same way as the anonymous artists who carved cathedral frontispieces used to. Tips of tormented icebergs, faces and figures floating above the walls refer to what is doubtlessly concealed beyond their physical threshold, which cuts off our vision and moves us to consider that other agonising world parallel to ours that we divine and do not see. When we bring our pain up to the Wailing Wall that is all experience of misfortune, will they watch us thus from the other side, with those expressions of in tense pain, those writhings of suffering? Perhaps what separates the worlds is a flat, oily surface at times broken up by moving gestures that struggle to change worlds in vain without knowing that the two are one and the same.

Lidó Rico stacked small skulls in piles in a corner, so me of which glowed in the dark when the light was turned off in a transversal reminder of the famous works by the nowdeceased Felix González-Torres, who piled up sweets in his Lover Boys series in the exact measure of the weight of the portrayed personage – sometimes he himself or his close friend Ross or his own father – with the particularity that the exhibition visitors were invited to take one of those sweets and suck on it , thus slowly melting the work in the conventional sense of the term- because of course, we know that the ideal work in itself culminated in its disappearance in the spectators’ mouths. In the case of Lidó Rico’s sk’ulls in Palma, although the reference to González-Torres was clear, the public was not explicitly, nor formally invited to pickup a small skull. Moreover, I understand that Biel, Casal Solleric’s infallible and ultra – effective security guard, the authentic living memory of that cultural space, had express orders to prevent just that , a task t hat proved to be the prototype of what is understood in police slang as a “mission imposible”. Because the conditions was perfect for “pilfering”,for taking advantage of the penumbra or better yet, the total darkness that fell when the lights were turned out to let some of them shine – all of it a perfect invitation to pick up one of Lidó Rico’s small skulls like someone picking up one of González -Torres’ sweets- although, by the way, the act had a very different meaning, be cause here it might have been like swallowing not a virtual or vicarious portion of the personage portrayed, but rather an oracular piece of the artist’s or portrayed subject’s future death. Yet, people’s unconscious habits are implacable laws and so many exhibition spectators may have unknowingly been starring in a macabre continuation of the Cuban-American artist’s work and stole sorne of the tiny skulls, thus turning the installation into a classic example of relational aesthelics. I myself have one
and I say it here so that the competent authority who commissioned this essay- respected Joan Carles Gomis, I’m talking to you here- can fine me and thus, in passing, save the expense of paying my fees for it.

Aside from the above, another question to highlight in Lidó Rico’s work on display at Espai Quatre is the boldness involved in a language that uses the human body and other forms of the real world, such as pieces of a discourse that can be seen to be totally contemporary. He is obviously not alone in that audacious adventure, because Juan Muñoz’ genius had already travelled that road before him, to offer an example that in addition to being close to him since he was a compatriot, is also close to him because of the many other subtleties at the heart of the discourse. Yet, this is no obstacle to acknowledging bravery and difficulty right from the start, since realism, which is more than an inevitable tool here, specifically the human figure without transformations of scale or physiology of fantasy – please se e Kiki Smith or Lucien Freud himself- is merely an alphabet for expressing something as indescribable as a soundless cry, a pain that has no beginning or end, a profound rebellion against everything that the given reality contains, i.e., against realism, in the final instance.

To speak of Pompeii is not gratuitous, but neither it is definitive in Lidó Rico’s work. It is true that the fate -tortured bodies that suddenly collapsed were closely related to the result of that so-called “immersion protocol” whence the artist’s work arises. And that also in Pompeii, silence was the way in which the cry of the models that played the main role in that involuntary “immersion protocol” crystallised. Yet, there are many other aspects that separate the two worlds, and not only will and representation, as in Schopenhauer’s well-worn theory.

Lidó Rico immersed himself in plaster’s fluid – and now I am finally speaking of the “immersion protocol” – to a certain density, to make the negative whence the subject’s anomalous double, as Fernando Castro says, will later arise, now indeed in resin. Realism? Aside from the strange crucible of a kind of intimate performance by the artist, what was established there was precisely what was not in plain sight, but that which was heard, which was felt. Those resin forms were pain and an open wound, pustules of the unconfessable, exactly what we understand as the inexpressible: that which is beyond language. That is why art is precise and necessary, in addition to other things. Because only through it can we reach that nerve centre where all storms find explanation. Inner hell. The only hell that truly exists. 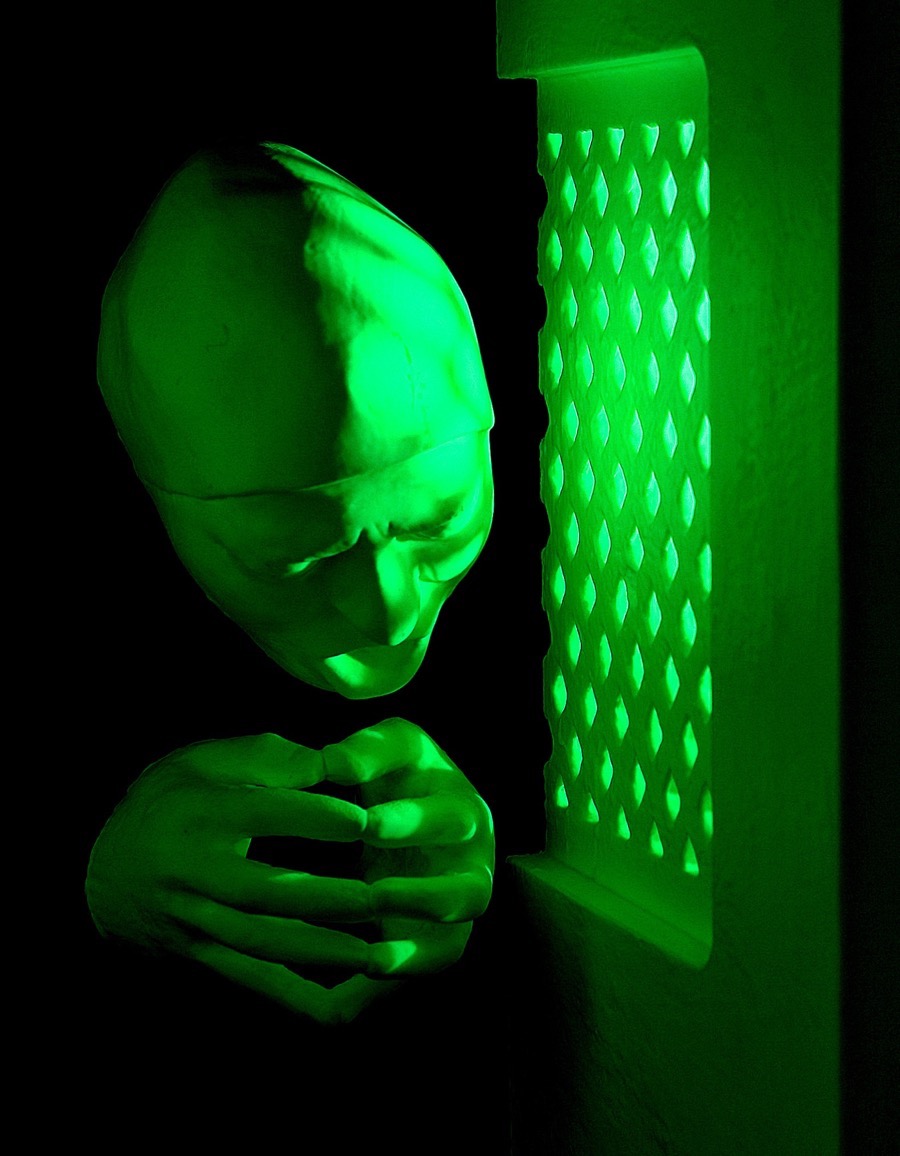