LIDÓ RICO: BEYOND THE HUMAN SPECIES

Beyond matter – substance that everything is formed of – there is simply an aesthetic approach. This is the point of departure for the artistic and poetic universe depicted by Lidó Rico’s work. Art is matter, life is matter, humanity is matter and they each will leave material traces on an Earth that will struggle to heal…

INESTABLOS, the exhibition Lidó Rico presents at the MUA, brings together the techniques of art from their material perspective. In his process, the artist works with liquid resin, filling silicone moulds previously carved out either by his own body or by brains lent by the Medicine Faculty of the Universidad de Murcia.

Yet, there is a further step to Lidó Rico’s creative process (and perhaps matter as well), which is a critical review of the Western anthropocenic discourse from a posthumanist point of view. With this in mind, INESTABLOS presents an exhibition space that occupies both the human and the non-human, the interstices that dilute the differences between nature and artifice. And it is this interstitial zone from which Rico’s work shakes and affects the comfortable conscience of the human species. These are brains manipulated by technoscience, addicted to technology, prisoners of media immediacy, slaves of the society of production, tired and exhausted, devoted to the addictions of a society that enforces constant efficiency. All these scenarios provide a great metaphor for the contemporary world and, above all, represent a critical and destructive reconsideration of productive capitalism and its philosophical paradigm: the anthropocenic humanism.

Each society develops its own illnesses (Byung-Chul Han, 2012). The society of constant efficiency is characterised by a growing appearance of neuronal illnesses such as Attention Deficit Hyperactivity Disorder (ADHD), Borderline Personality Disorder (BPD), Occupational Burnout, and Alzheimer’s. Illnesses that represent the death of a human soul facing constant pressures and abuse. In other words, they symbolise the exhaustion and weariness of excessive information and work.

We have left behind the society of surveillance (Foucault), a disciplinary society that organised social structures in relation to disciplinary spaces: hospitals, asylums, prisons, quarters, factories, etc.

These heterotopias perform the same social formula to train, to instruct, to heal the individuals that are far from normative standards of health, social behaviour, and obedience. In the 21st century, society entered the era of competence wherein social structures are meant to make us productive: fitness centres, media technologies, production and circulation of knowledge, net society, no-places, virtual workstations… everything that transforms the individual into a hyper-productive subject. The mental changes that this society of efficiency provokes start with language. In other words, they move from the denial of the verbs must and have to of the society of surveillance (Byung-Chul Han, 2012), to the approval of the verbs can and make – principles of rational efficiency. Projects, initiatives, and motivation replace obligation, order, and law. Collective unconscious now has the inner desire to maximise production. The well-behaved subject of the society of surveillance moves from obligation to capability. He or she embraces order and transforms him or herself into a tyrant, meanwhile being overexploited. This is the major departure from the society of surveillance, in which one could rebel against somebody else from within. Instead, in the society of efficiency this bizarre request takes place within the self who gets self-exploited and self-transformed into a tyrant. The symptoms are clear: depression, weariness, inability to perform… The end of the will that Melville perfectly describes in his prospective tale Bartleby. The aforementioned quote «I would prefer not to» represents the apathy, the lack of initiative that the dead soul has.

In the artistic approach of Lidó Rico’s work there are artworks that express the systemic violence practiced by the society. INESTABLOS reflects on a fragile and unstable humanity, emotionally wounded, that is devoted to the escape routes of the self. It shows the weariness of the soul in a society that has transformed the rational productivity into the standards of human beings. In this sense, the work “”Wi-Fi zone” – a series of brains with technological implants – is a great metaphor for this endless effectiveness. The same effect occurs with “100 maneras de descubrir un secreto” (Hundred Ways of Discovering a Secret) where we see zip-brains punching their own insides, or “Landscape on White / Landscape on Grey” where each of the trepanned brains emerges with a little human figure made out of silicone.

Enlightenment and Modernity are indeed the historical moments of the humanist paradigm we are leaving behind. Foucault already warned us about the extinction of this paradigm. The death of the subject is the death of the cognitional Kantian subject – the centre of the universe of perception and depiction of the world. But Marxism is also involved in the humanist paradigm we are leaving behind; a univocal and hegemonic subject designated to be the real driving force of human history, responsible for the historical progress and social improvements of the world. It was the feminist movement (Irigaray, 2009) which started a criticism toward white men and their scientific rationality from a epistemological and political approach along with omnipresence of European humanism, guard of morality, and human evolution. The postcolonial movement (Said, 2007) started precisely by criticising humanism, the illusory arrogance of canonical belief that decided what, who, and how the other is and has to be. Who are the founders of the social contract, the native citizens who decide the foundations of justice? Free, equal and independent men. Kantian heritage excludes from the foundations of society and justice the dependant, the different, the disabled, and of course, the animal species (Nussbaum, 2007). Another sexuality, another rationality, another race, other capacities or disabilities, are out of the contract of citizenship. Phenomena such as sexism, colonialism, the core belief of scientific reason, and other socially approved systems of value, are consequences of this humanist paradigm (Braidotti, 2015).

In order to escape from the social tricks of humanism and exercise a critical approach, Lidó Rico’s body of work develops a practice that deconstructs the paradigm of modernity, discrediting the central assumption of the theory itself: the subject-centred rationale. Bearing this interpretation in mind, the human brain is the linguistic/artistic unity that the artist uses to articulate his discourse. Some artworks from the series INESTABLOS bring to mind Foucault’s definition of the human as a modern historical construction. As Foucault expresses this idea in the Preface of The Order of Things, no one exists outside the historical forces that constitute us. It is a fact that technologies of the body – medicine, biology, psychology, psychiatry, social sciences – that have traditionally constituted the modern subject are the ones that are being substituted by the new technologies that dissolve and dilute the dualisms of I/other, mind/body, human/animal, nature/culture. These categories emerged from the combination of new technologies with the human, diluting the sharp gap between the organic and the inorganic, and questioning the nature of the human and its relation to the other, the non-human, including the animal world. This situation forces us to articulate a new discourse around the dominant forms of these worlds from a metamorphosed humanism understood just as a new link to the material: the posthumanity (Braidotti, 2015). The main goal of this posthumanity will be to conceptualise the integral model of other non-human forms, as it is the time in which cybernetic technologies of power have begun to enter the bodies and create new subjectivities. Cyborgs are only a metaphor of what we, the citizens of the postmodern world, are transforming into (Haraway, 1995).

It is not only a matter of probing whether we are going toward a humanity of virtual lives, modified food, technological implants… It is a question of delving into the identities of this post-humanity-to-be (Braidotti, 2015). Here it is where Rico’s human brains explore these identities, through the silicone and resin moulds in which he inserts computer cables, microchips, small technological implants… as well as the contradictions of contemporary humanism trapped in the transition towards the paradigm of understanding. It is the paradigm that is expressed through the disturbing heads emerging from the same wall that holds other brains and states intense emotions and various addictions; plastic correspondences of the rational arrogance of the humanist man, of the abuses of those who allow the logocentric capitalism be part of, a capitalism that traps every single species in the global economy assembly. This exploration of fragmented heads and bodies highlights the fragility of the human being in a system that overpowers and forces to live a life on the verge of the accident and contingency. The management of war, fear and emotions, and the technologies of death summon questions about the humans we are and will be. The question is: Which human identities can we invent in the new posthuman scenario?

«The posthuman predicament has more than its fair share of inhuman(e) moments», Rosi Braidotti postulates (2013: 9). The posthuman does not imply the end of humanity but the end of a certain understanding of the human. The end of the humanist paradigm of sciences, knowledge, and social organisation that had as main goal to control nature and that has ended up colonising life through the logics of profit and the market. It is from these views that we have to probe the transformations that took place in social spheres and human identities. Technological improvements and the blending of the human being with technology move us to this stage. One day our brains will be hybrids modified by technology as the ones in this exhibition. Being able to explore the possibilities of the hybrid and its denaturalisation will go through the remastering of the world.

For this reason, Lidó Rico’s body of work outlines an ongoing approach to deconstructing the essential brain at the same time as it symbolises the effort of opening the doors to a new discourse against logocentrism. The plurality of brains, the pantone of their representation points our diversity, transformation of the singular to the plural, of the isomorphic to the heteromorphy, the breakup of the canon, and the opening of the diversity of the posthuman subjects from the interstitial zones at the confluences of the boundaries. In his analysis, Lidó Rico compares and deconstructs Western discursive practices, their dependencies, and their forms of dominance to build an artistic approach that situates us in front of the hard cultural and political duty to redefine the concepts and the limits of society. This duty is a compromise with no turning back.

INESTABLOS is a room of conceptual mirrors, metaphors, and reality of the contemporary paradigm from which we can begin to think about the possibilities of life beyond human species. This is why it disturbs us; it bothers us because it brings us face to face with our own fears and contradictions.

FOUCAULT, M. (1970). The Order of Things: An Archaeology of the Human Sciences. New York: Vintage Books. 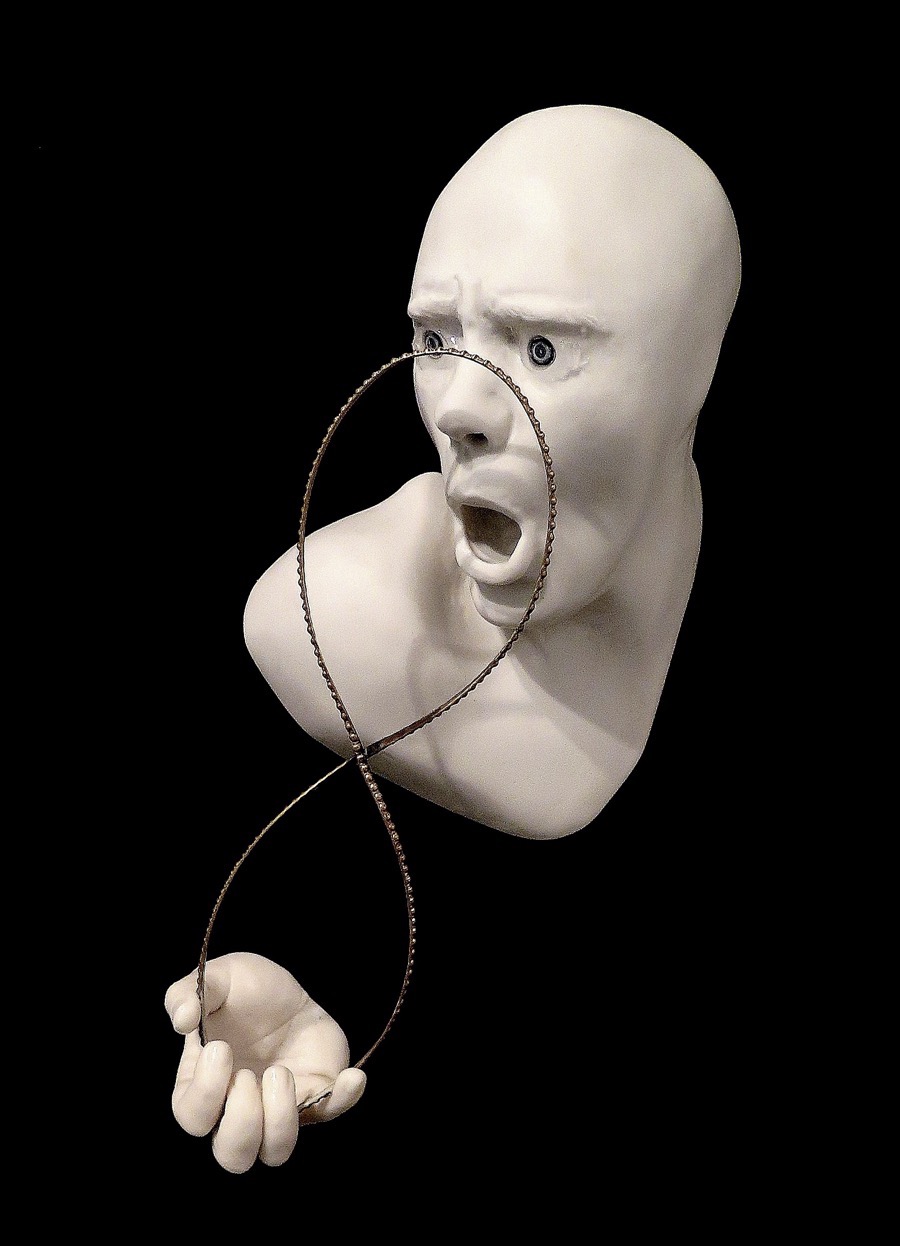