Throughout the Sixties and Seventies, two of the most important representatives of committed art in Spain: Rafael Canogar and Juan Genovés, created innumerable works halfway between painting and sculpture – in fact, the critics of the time coined the phrase escultopintura (sculpture/painting) to define them. They consisted of three-dimensional figures that literally jutted out from the canvas, which advanced until they were frozen at a particular point in time. So, depending on their position when their forward movement was stopped, they became bas, medium or high-reliefs. Invariably black shapes, with hardly defined faces that, anticipating the pictorial support, in their flight from it – another profoundly black space -, symbolise the terror of Franco’s repression. The feelings of desperation almost always became apparent through body language, especially that of the arms which, thrown forwards, very clearly expressed, like the
Magdalenes of the ltalian Trecento,painters, the terror and the rage unleashed in those situations. Therefore, the human body exteriorised the feeling of fear.

The end of the dictatorship seemed to propitiate the end of the tortured body. That would be due to the new political order. However, the body recovers its importance in the final decades of the century when it becomes the scenario where sorne of the main threats that stalk modern man are settled. “Your body is a battlefield”, stated Barbara Kruger in one of her works. The new diseases, the debates on sexual or ethnic identity, the ambiguity of the cyborg, to mention only a few of the problems harassing us during this period, are in fact settled in the body. This is why, for many artists, the body has become something more than a mere support on which to develop their discourse; it has become, with Orlan for example, a fabric of transformation. The artistic corpus invades and supplants the real corpus.

This prologue has served to situare the work of Lidó Rico, an artist who also focuses his creative work on the body, as an icon but also as a medium. Indeed, his own body constitutes the iconic material of his creations when he uses it as their mould. From this point of view, his work, on becorning a permanent reproduction of his corporeal shapes, could lead us to think that it is a personal, almost narcissistic exercise. However, the results show that nothing could be further from the truth. Because Lidó Rico uses his body to express stares of pain and anguish that, what is more, do not refer to himself but to a generic individual: modern day man. There is, therefore, complicity with the environment, meaning a comrnitrnent such as that acquired by artists in Franco’s time, although the very different circumstances of this period impose different discourses. It is not now about revealing the blatantly repressive conduct of power, but the state of disintegration that awaits the individual in this post-industrial society.
The pain may be physical, but it is almost always spiritual. It is difficult to compare the lack of communication and rootlessness with the ever more abundant manifestations of massive gregariousness. The subject lives his reality tragically. Por many it is a material drama, for others a psychological one.

Lidó Rico’s characters, literally vornited from the pipework, entangled in knots that are impossible to undo or simply doing everyday things, make up so many dramatic expressions of the violence that besets modern man, the true face that hides behind the ostentatious appearances of happiness and of joy. The real face of so many unhappy existences. It seems, for different reasons, that man is condemned to endure a wretched life cycle; there seems to be no recess, no truce in the accumulation of miseries that would allow the spirit to relax. It can’t be an accident that these representations by Lidó Rico share so many things with the works of the artists in Franco’s time that we mentioned at the beginning, not only because they coincide in the way they represent it – Lidó Rico’s works are also esculropinturas (sculpture/ paintings) – but because they resort to the desperate scream that, in his case, is always a scream of immense pain. His prisoner figures acquire a greater dramatic hue, as they are locared directly on the wall, something that enhances their degree of realism as it sidesteps the reference to the pictorial framework that those of Canogar and Genovés maintained. If, in the works of the latter, the space they proceeded from did not really imply a tie (as it was the persecution by repressive agents that provoked their panic), in those of Lidó Rico the threat is invisible, as the cause of the pain is to be found in the individual himself. That is why the wall becomes the material support for the aggression, the space of reclusion. The titanic efforts to escape increase his suffering. There lies the expressive key of this work that I would let myself compare, as I have already done elsewhere, with the most dramatic proposals of Michelangelo’s sculpture, which can be extended to the most exalted Baroque sculptors: Gian Lorenzo Bernini and Francesco Mochi, for example. But this Neo-Baroque identity of Lidó Rico’s sculpture embraces the idea of Michelangelo in two ways above all: creative experience as the liberation of material and as an act of pain.

With reference to the first idea, the modelling of the image for Michelangelo was an act of liberation, as if the figure were trapped in the block of stone and were freed by the gouge; a liberation similar to that which Giuseppe Penone carries out with tree trunks, also looking for the essential structure by suppressing the overlying layers. When Michelangelo was sometimes unable to conclude his operation of liberation: particularly with the slaves, the serni-liberated figure maintained a struggle with the mass to which it has been irremediably united forever that was as unending
as it was tense. So, what was the consequence of unforeseen circumstances provided added value but when all is said and
done, a value of capital importance, to the sculpture of the Florentine artist. Lidó Rico’s figures maintain this combat in
another way, as the material that grips them is much more perceptible, although none the less mortifying: the wall. Even the marked contrast between the smoothness of the support and the rhetorical complexity of the shapes that protude from it: intricate in their gesticulations, audacious in their chromatic explosion, threatening in their shrieks, tramsmit a feeling of irnpotence with a force as consistent as that of Michelangelo’s slaves. Lidó Rico’s figures are not the result of a liberation of the material, but their adherence to the wall, the fact that they are high reliefs, establishes a virtual trial of strength with it. With respect to the other element, pain, Michelangelo considered it to be the fulcum of the creative experience, as the element that redeems the material of its condition and converts it into sculptural material.
The artist himself redeems himself in said process. For Lidó Rico, pain also has a physical aspect by converting the process of creation of the work into a true performance. Smearing himself all over again and again to obtain the different moulds required to make his sculptures, the artist transmits, gives shape to his physical feelings that in their final elaboration become incarnations of spiritual uneasiness. His figures, always fragmented, show the tearing apart that besets them internally. Faced with the example of emotional unease shown through gesticulations, Lidó Rico prefers to focus his lament on the faces that become expression’s nuclear space.

The face. Here we have the corporeal space that shows the feelings of the subject most honestly. This is why, when painting abandons its immature mediaeval stage, the face begins to become
relevant. It is no accident that the great Giotto was the first to raise its role to a level hitherto unknown. The contemporary world dramas of avant-garde artists are also expressed in the face: Picasso, Kokoschka, Grosz, the members of CoBrA, etc. Cries, laments, which acquire the condition of disproportionate in so many circumstances of our times. The distorted gestures of Lidó Rico’s figures submerge us in the pain of contemporary man; physical pain as the support of spiritual pain, facial deformation as a spontaneous sign of uncontrolled internal impulses.
If Charles Le Brun, the artist and theoretician of the French Baroque period, in consonance with his academic mentality, elaborared an array of physiognomic types to express different states of mind, Lidó Rico prefers spontaneity. It is during these operations to make the moulds that the physiognomies are built, almost always in torment. In this way physical pain gives a formal channel to internal pain. The end result of his effort is manifested in corporeal fragments, residues of the same fixed by using synthetic resins. Faces, heads, extremities; the broken body that cannot ever be stitched together, beyond the feeling of physical pain itself, corporeal disarticulation is a reflection of internal agony. 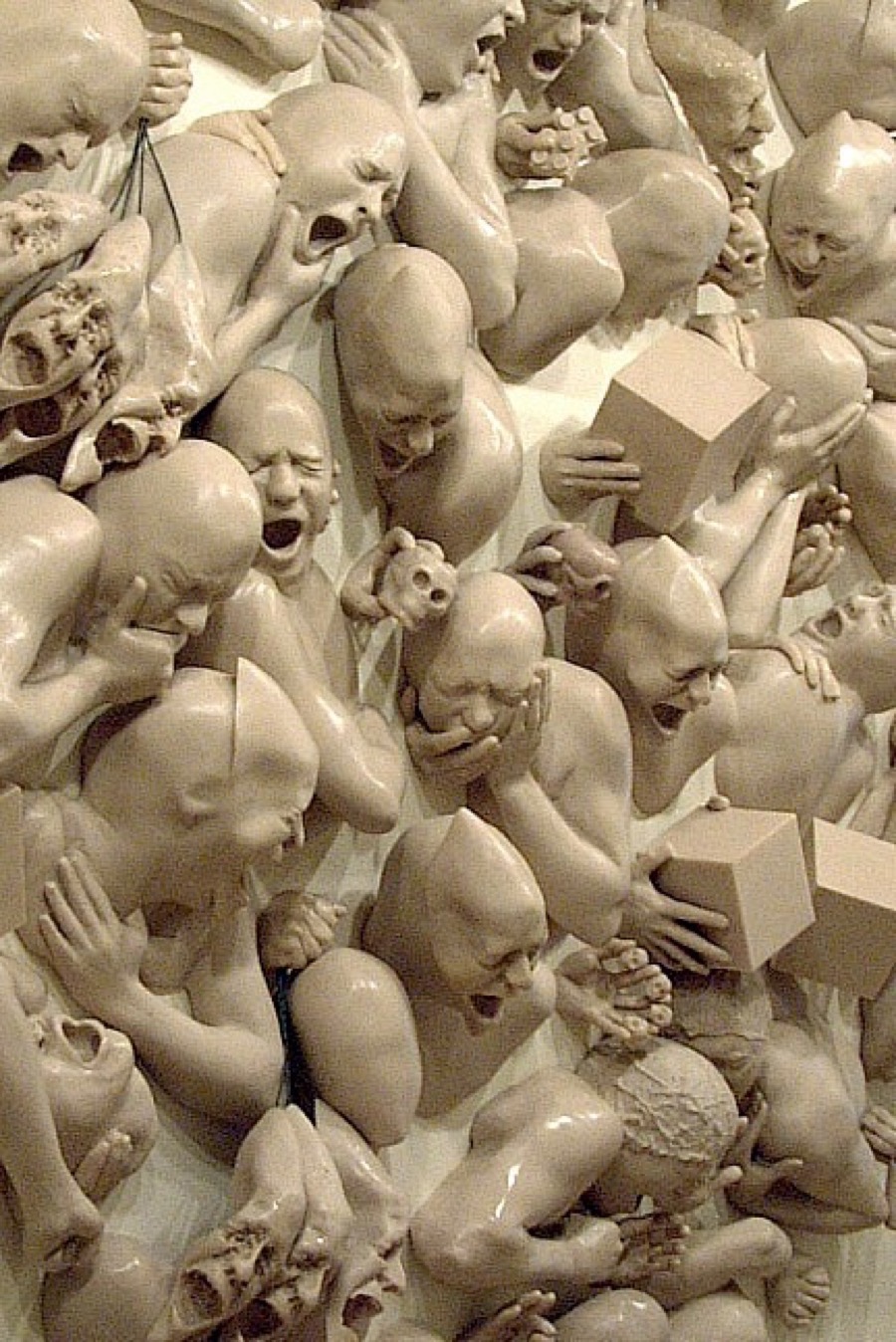