INESTABLOS: ADDICTIONS TO PINPOINT THE HUMAN

Contemporary art has more to do with production than creation, with conception than intuition. As an idea and an object, art has turned into a hybrid process contaminated by multiple references, opposed to disciplinary purities, inclined towards dematerialisation, and visually intermediated. Strategies of meaning and politics of representation of postmodern artistic practices are closer to the monolithic discourses about the body as an archetype – whether of genre, race, or any standard consideration related to beauty, health, or social status. As a result, the art of our days focuses on a fragmented body conceived as a battlefield (as performative locus), a body of multiple identities resulting from multiple postdiscourses, a corporality penetrated by the microphysics of power that exist in the material and symbolic order of society. It is no surprise, then, that the body is no longer a pure organic and anatomic entity but a cultural and social one… and as we often discuss it is also technological, bionic. The concept of the body that Lidó Rico’s work articulates perfectly fits in the aesthetic and intellectual currents of our time.

His sculptures represent a dismembered body (his own) as an allegory of a painful and fragmented being, possibly misplaced, deprived from narrations such as religion and social utopia, responsible for creating the individual and collective subject around which everything seems to revolve: a subject whose moral pattern can be considered a canon. In a way, Lidó Rico’s production draws a special graphic symbolism of the corporeal, a sort of writing made out of arms, legs and foreshortened heads, of petrified gestures and mute shouts.  The anatomic precision of the body seems transformed – using Barthes’s expression – into writing «degree zero”. In Lidó Rico’s sculptures the grammar of the corporeal seems to be pushing the boundaries of the aesthetic discourse at all times: the fingerprint of the artist’s style, the clear materiality of his works, the severe objectivity of the resin taken out of the mould of his own body. The boundaries of this somatic writing and its expressive force are diluted and reconstructed constantly, defining the way artworks are experienced. The spectator gets caught in the midst of this tension, fascinated by the explosion of forms, seduced by the symbolic transgression of the body, confused by the quasi-carnality that, disturbingly, feels almost real. Lidó Rico’s figures work as a twist of the lacanian mirror phase as opposed to the reinterpretation of the concept of the mask or replica. The distant reflexion of a spectacular surface is now immersed in the whiteness of the plaster in order to deconstruct (neither replicate nor cover) that imaginary junction of the self in front of the mirror.

INESTABLOS is the title of Lidó Rico most recent exhibition. During the last few years, the artist expanded his artistic research, which consequently brought him to draw on the human brain as his conceptual tool, that is, the creative matter of his oeuvre. Lidó Rico collaborated with microphysicist Kuei Y. Tseng and neurobiologist José Luis Ferrán in an attempt to absorb their knowledge, developing an intense dialog and reflecting these discoveries about science, the human mind, and the brain-based form from an aesthetical approach. The extension of the laboratory bench into the atelier of the artist (and vice versa) could be understood as a metaphor of the crossovers between art and science. This is also represented in the research project, Genoartquitecturas, in which this exhibition at the museum of the Universidad de Alicante is included.

In the images that document the process of Lidó Rico’s artmaking in the studio, the artist is holding a human brain while staring back at it with a mixture of pleasure and anxiety, and perhaps with the anguish one would get from the corpus delicti. I see him caress something extremely fragile though it is the matter that forms the soul and along with it dreams, memories, desires and disorders. He wears lightweight gloves and a breathing mask. I imagine his mind being as sensitive as the mind of a newborn, amazed by the small gap that divides our biological nature from the spiritual one, astonished by the blurry line that differentiates our brain from the one he is holding, to the point at which this line is nothing more than a farce to pinpoint the human. This is how I see the artist just before he covers the brain with liquid silicone in order to, once dried, produce the mould that will create the sculptures. I have no doubt that if he had had the chance, he would have poured his own brain into the silicone mould himself. Lidó Rico does not like distant subjects, themes created out of the artifice of representation. He loves the real in every form, in its brutality and immediacy, to the point in which he wishes he could fuse his own body as part of his art.

The scene I am describing does not portray a divine creator, a scientist, or a shaman in the midst of an exhortation, but an artist facing a reflection around the fragility of our heavy condition without prejudices. Especially if we accept ourselves as a fragmentary complex of slightly unknown neuronal structures. Rico is someone who conceives of the brain, in his own words, as a space of conflict. The brain has an amazing architecture capable of creating emotions, feelings, thoughts, fears, memories, oblivions… that transform us into smart and creative creatures, or vulnerable and stupid, believer or sceptic, pacifists and empathic, or violent and aggressive, sublime or banal, free or slave, dependant and addict. For these reasons, the brain as a type of synecdoche of the human and a corporeal matter serves as a fecund tool for Rico to carry on with his research.

Most of the artworks in the exhibition relate to the subject of addictions in all their possible forms: addiction to drugs, sex, money, religion, violence (and new technologies. With the title INESTABLOS – a wordplay between the Spanish terms unstable and cowshed or stable – the artist aims to explore the contradictory condition of the brain that is also the contradiction of human beings themselves. Unstable by means of fragility, versatility or plasticity, as something incomplete, susceptible to change, both positive and negative. Perhaps this is just the somatic condition that leaves room for what we call freedom. At the same time, it also relates to the idea of being held, controlled, submitted, either from external reasons or internal malfunctions.  In this sense, the addiction would be a sort of (dys)functional form of the wired brain.

The figures of heads, each holding a brain attached to their faces, brains whose interiors we are able to see, or the sculpture made out of curved pieces of glass – as a kind of translation of a neuronal symbolic writing – are a sort of violations of our most obscure and unknown inner side. It is as though the soul were to be cut into pieces, like the pattern needed in order to see the sewing: a slap in the solipsistic illusion. The linear installations of coloured brains are a clever move towards that idea of the normal and healthy subject that has been punished by the medical and educational authorities, which ultimately plays a key role in our surveillance and punishment. The spines of brains within wheels, as well as the installation of the brains filled with cybernetic implants, represent the humanist break and hence the progress that Western culture has cultivated for centuries as a sign of cultural identity. Ultimately, Lidó Rico’s sculptures place us within the in-betweens of both emotional and cognitive concepts of the human, and open new epistemological, political, and technological paths towards new forms of human relations and physical interactions. 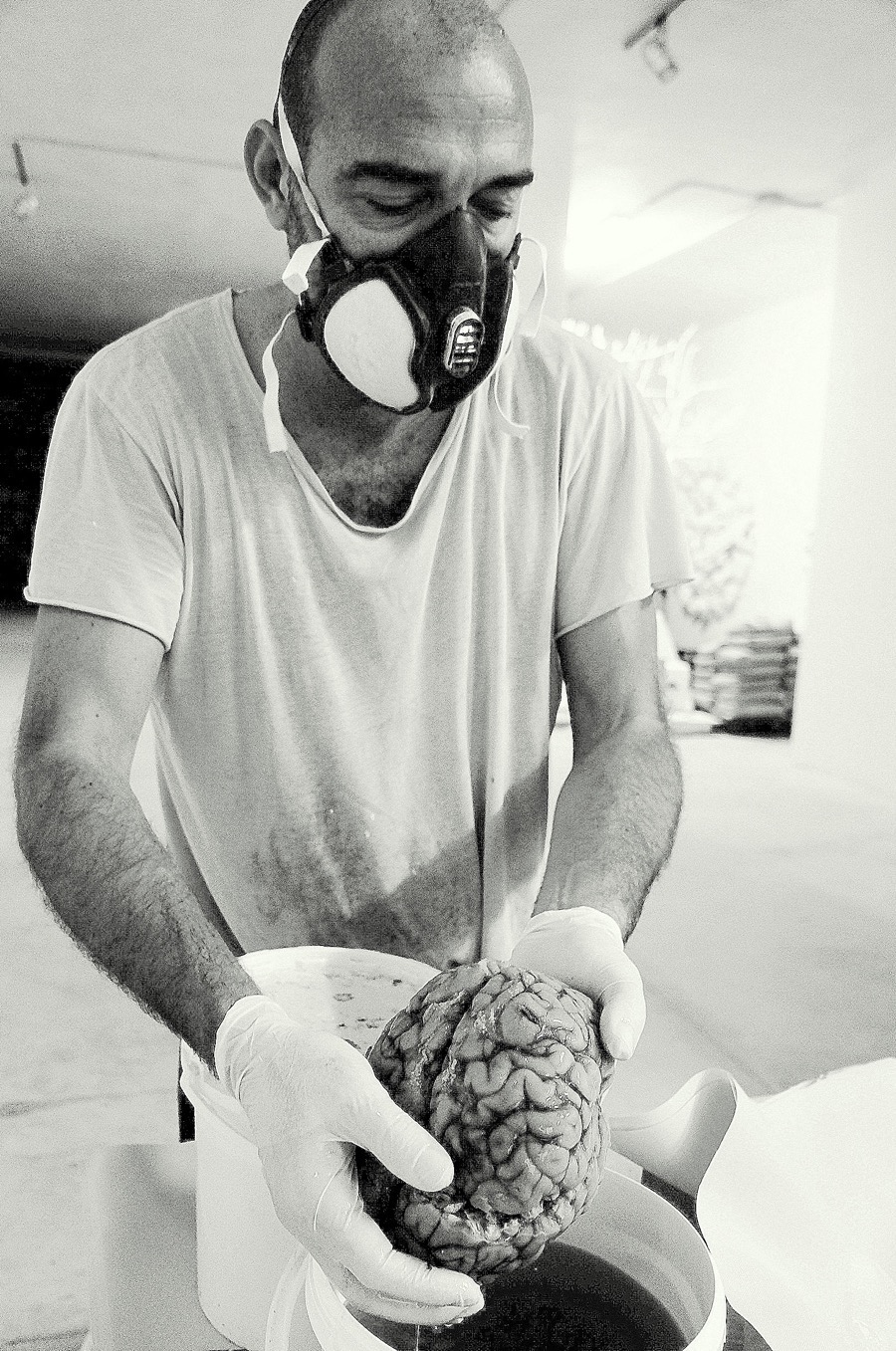