The extension of the traditional limits of art developed by contemporary plastic artists and initiated by the historical avant-gardes has profoundly changed not only the material nature of artistic objects, but the changes have affected the whole sequence of art itself, from its conceptual genesis to its reception and interpretation.
In other words, different relationships have been established, both between the artist and his work and between his work and the public. Transformations that have moved on from more or less formalist experiments to strictly conceptual positions and that have, from the 1970s, become a hybridisation of artistic genres. All of them have in common a desire to open a new space of communication for art, proposing the deployment of certain perceptive possibilities that go beyond mere passive contemplation as a necessary complement to the formal opening of the works. However, the expression of the subjectivity of the artist himself, his presence in the works has not always been manifested explicitly. A projection of the personal universe that in recent years has led to the multiplication of individual poetics in which artists show their attitudes to their mental, social, living
and professional environments. The artist abandons the compass of representation of the external, converting his work into a prolongation of his existence, before which he can react with mindset that is not only distant and ironic, but also passionate and vehement. Different attitudes to life and art, but underlying which there is the desire to sieve works of a subjective nature, dialectically linking observed reality with that which has been
lived but, at all times, making its presence leave its mark on that which is empirical.
The concept of art as experience is the basis of all Lidó Rico’s work, not only because the traces of his existence are apparent in his works, but also because it is a work that has been fashioned by the experiences of daily life, by a constant awareness of his world, in every situation and at all times moment. A sense of the world that has no place for sentimentality or nostalgia. Quite the opposite, his works, far from becoming comfortable in their setting, stretch it violently and remove it from any neutrality, from the passivity of the routine associated with his everyday life. So he does not an approach to reality from that which is conceptual, but from the flip side of realty. This means that the situations that take place in daily life are presented in such a way that they mutate into disturbing events. What is commonplace acquires a sinister face, a stranger unto itself, an almost unrecognisable identity, but one in which its fragmented remains still linger. The polyester resin gives the pieces a fossil-like look, a resource that the artist uses to make the spectator excavate inside what has happened
there, to investigate the forces behind its genesis. A hunt towards the development of the creative process that has given shape to this strange everyday life. So the works project themselves in two directions: the creative process and external reality, two areas towards which the works act as signs of the relationship that the artist establishes with each of them. In the case of Lidó Rico, they give shape to an uninterrupted journey.

For Lidó Rico the process of conceiving and executing the pieces is not a stage preceding the finished piece, but both moments are identified with each other in his work. The distance between the author and his work is completely annulled. There are neither nether models nor montages. The artist is his own model, he is the one physically represented in the work, but not by shaping the body with his own hands, but physically penetrating the mould of the sculpture. The vocabulary of sight and hands gives way to the total, direct corporeal language where that which is physical speaks for itself without any go-between. The artist does not work facing the work but he enters it totally. Every creative act acquires a certain ritual tone, like an immersion baptism. Acts that
remain in the field of that which is private, within the framework of the intimate relationship that the artist and his work establish with each other. The results are the traces of this dialogue. A relationship in permanent conflict. For Lidó Rico, the workshop and the mould are a metaphorical battleground on which to imprint the traces of the disquiet of daily existence, the enclosure where the combats between contradictions take place. This is where that which is repressed and hidden within the daily bounds of our habitat bubbles u p. With that which is physical, there are no ideal representations, canons or sizes. Everything is naked, direct testimony of a creative process that is the fruit of anguish. In this existential microcosm there is no place for the mock reality
that spreads out along its confines. With an autobiographical work free of complacency, the author shows through his sculptures, that are the extension of his body and his passions, an unease with life in which all experiences accumulate, not only in his mind but also on his environment.

But the resulting body is fragmented, torn apart by the effects of this inevitable reality. There is no way out. The contemporary artist renounces any pretence that he is founding new absolute values. This leads us to the second level his work projects: his relation with his environment. If classical aesthetic categories, meaning beauty, but also sublimity and picturesqueness, always alluded to a positive relationship with the work, it was because a
relationship in harmony with the world was established from them. Pleasure is a positive pleasure, even when sublime, because the necessary distance always placed the spectator in a safe position. But now this distance has been completely eliminated, that which is physical acts without intermediaries, robbing the spectator of any contemplative hiding places. A negative attitude is demanded by that which is artistic as a response to mock reality. If fiction is really that which annuls communication and experience of reality, Lidó Rico resorts to naked reality to incite this life experience that has disappeared in show business society. From these fragments of experience he configures spaces to deposit the remains of his creative work, of his heartrending view of the world. 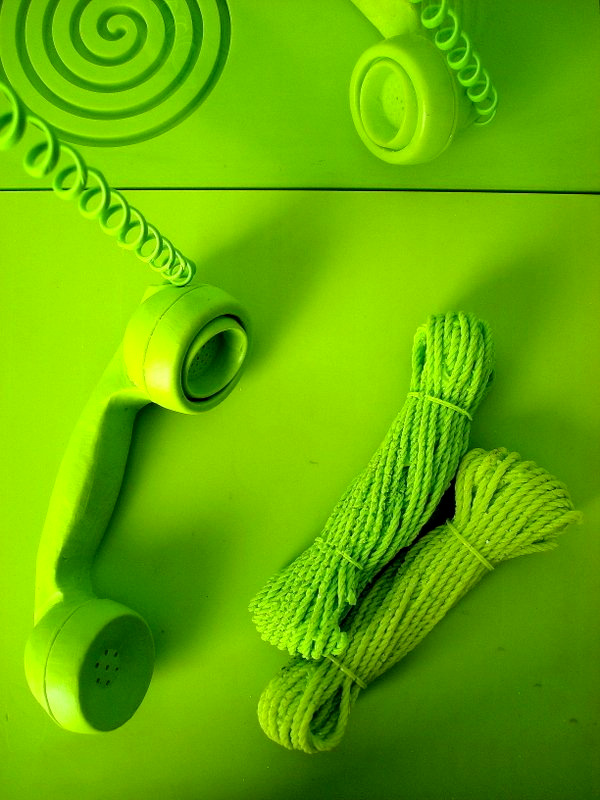