A short while back, a philosopher friend of mine was wondering who might be considered the prophet of the century now coming to a close. His opinion wavered between Nietzsche and Kafka but I detected a certain tendentious bias in his text in favour of the first. A melancholic wish was perhaps at the root of this bias and I was quick to identify with it in view of the chill prospect of the Kafkaesque altemative, whose pertinence must be admitted. I preferred indeed the angry, partisan and persistent militancy against the power of speech to succumbing without being able to identify the enemy, let alone detect his failings. However, despite the fact that I tend towards the cotunter-culture, I agreed that my friend was right. Indeed the neutrality of the Austro-Humgarian administrative system was reduced to nothing compared to the aseptic “single thought” of current times, which controls media and forms, obviating the need for contents and peopling the
conmunity with insensitive lotus eaters whose identity is no longer fragmented but simply non-existent. The result: the confederacy of dunces prevails over any other conspiracy, all of them objective allies, failing to pursue any noteworthy objective. On the other hand, and in marked contrast with what is said above, I must
express my great satisfaction with the virtues of the current intellectual and artistic scene.

I believe that never before in my professional career have I lived a freer situation in regard to humanism, science or art. It is as if a complete freedom of knowledge and the consequent infinite poetic space were there, just around the corner, only to be passionately and continuously taken in and put to use. Moreover, modernity, almost at the expense of its own permanence, has shown that the only viable way to survive
honourably and coherently is to intermingle poetically with reality, fully implicating ourselves, in order to redescribe the meaning of our existence time and time again. I wonder if this paradox, shaped by Kafkaesque violence and the definitive and simultaneous discovery of human creativity, is responsible for the revival of the aesthetics of cruelty, a revival I have observed all around me, especially among the younger generations.

I would say it is probably so. In any case, I must admit that 1 was deeply shocked by the anthropomorphic and violent twist that Lidó ‘s latest works have taken. With the coldness of an operating theatre, death,
ecstasy, guilt, self-inflicted injuries and even decomposition and lacerations pervade the dense conjunction of metaphors that activates the exhibition halls. The hyper-expressive contorted figures, which emerge from the walls at different heights together with segments of furnishing and other varied items, seem to be
accidents, spasms or aggressions completed on the other side of the mirror It is as if what we perceive was the inner lining of the skin and other surfaces, like a suit that has been turned inside out.

Visitors will find themselves in a kind of photographic negative space or among imaginary numbers, if I may use a mathematical simile. In this way Lidó creates an atmosphere of critical materialism, which is both close and absolutely foreign to the viewer. Close because of the terrible expressions that remain suspended in time and foreign because of the intangibility suggested by the textures and the protuberance of the figures in relation to the plane of the wall. The careful distribution of figures and objects exorcises any nonsensical scenographic attempt that would have been unforgivable due to the obviousness and expressive density of the motives. On the contrary, the climbing dispersion and the constant contras/ between areas that are crammed with figures and others where the emerging figures are sparse, lend a unity to the whole exhibition that makes any search for plots or narrative anecdotes completely superfluous.
The rotary handle activating a wind-up will reminds us of the carefully ambiguous translucent wax and
plastic pieces, whose simple forms were combined with tiny images, figurines and other objects in Lido´s past works. The connection with the receptacles full of fingers shaped in resin seems, at first glance, evident. In my opinion, however, it is not quite what it appears to be. In both series of works the endless polysemy of signs prevails over any identification. This polysemy is exacerbated even further in the magnifying glasses and light bulbs that have been manipulated with different types of varnish and ink, like an amber reliquary, keeping anonymous photographs that are somehow embellished by those strange cameos. All of these works originated in the territory of the ineffable, there, on the edge of the describable, where feeling is without thought but intuition is material.
We are now on the other side, where the voyeur cannot venture, perhaps because raw violence destroys the signs, instruments of freedom and creation as they are. Violence does not allow for redescriptions because it suffocates any poetic attempt. Hence, Lidó shifts the ambiguity of matter and images, in this case, to the global composition of the exhibition space so that we can perceive the aggression from the victim’s consciousness. I believe that the paradox I mentioned earlier was quite appropriate.
Life is either art or violence. Lidó does not leave much room for evasion. 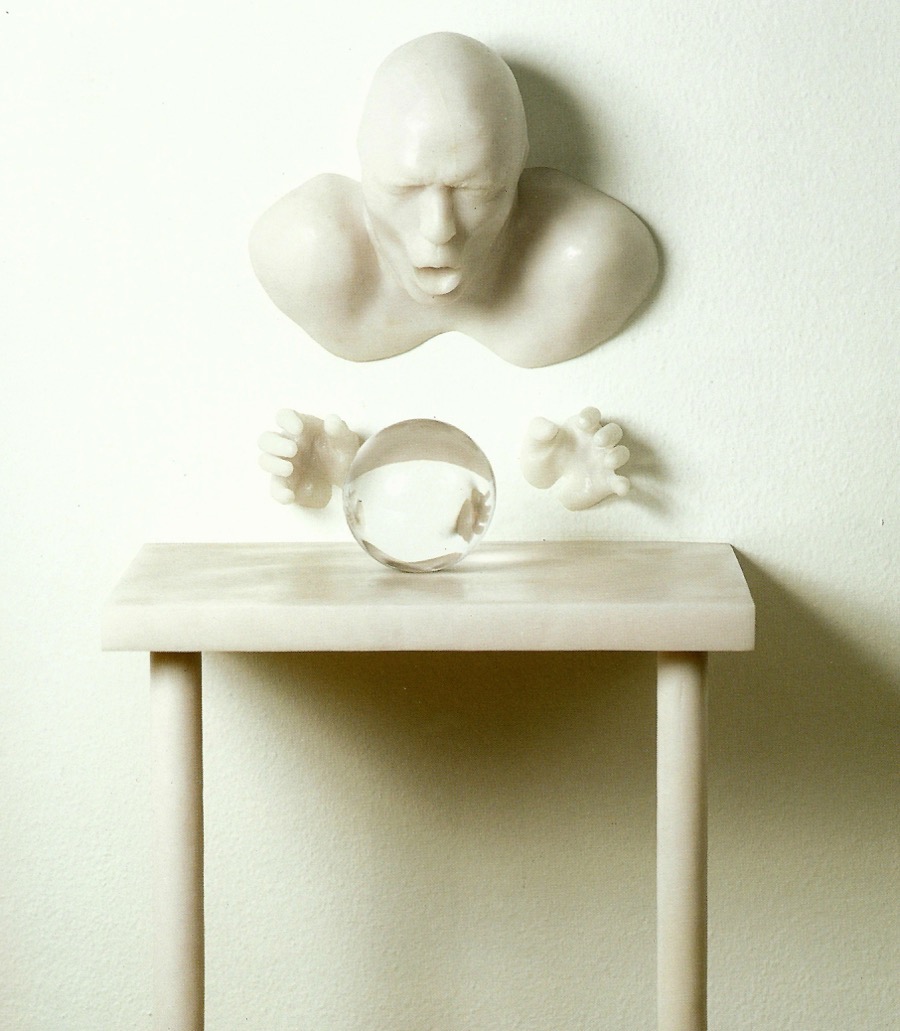