The Hermitage of los Dolores has a strong connection with your work given that, as you explain, “pain” (dolor in Spanish) is a critica! subject in your creative process. Could you describe this process for us?

The origin of the Hermitage of los Dolores does not have such a spectacular legend to it as some of the other hermitages. like mostchurches, its construction responded purely to devotional purposes. What 1 really liked about the venue was how well I got on with the local women who look after it. Besides, my mother is called Dolores. I was also interested in the notion of dolor, Spanish for pain, to the point that I became obsessed with the word and decided to appropriate the space.
Pain, the torment inflicted on my own body, is part of my creative process. For more than twenty years now, l’ve been submerging my body in plaster and putting my hands in wax. It is a somewhat risky and difficult process that involved a large number of protocols that belong to the privacy of my studio. The question is that everything that sticks out of the wall is the imprint of my body submerged in matter. I have always thought that the toughness of the execution is confined and transferred, as if perpetually glued to each one of the pieces.
Every submersion is a voyage; my body manages to pierce and to detonate the plaster, engendering strange individuals, all of them selfportraits.
The history of ex-votos is rooted in the votive offerings left by the faithful to their gods in places of cult. With Christianity it became a
means to express gratitud e for the healing of an illness or for a divine gift. In your case, it is the very creation of the ex-voto that produces pain. What is your motive for making these ex-votos?
lt may be an offering of thanksgiving, perhaps a demonstration of gratitude for finding a specific language within a world as complex as this. My work comes from a biological need: I physically need these encounters to gain consciousness of my own body and my submersions, my pieces, my ex-votos, have a somewhat soothing effect. In any case, it is interesting to see that the more you torment your body and the more you torment an idea and try to get closer to it, the more you distance yourself. lt is a very odd feel ing that is hard to define in words.

You work with your body in a way similar to body art. Most religions reject the human body in detriment to the soul. The vindication
of the body by many art practitioners is a quite recent development . Do you see that espousal in relation with the notion of rejection of the body that has prevailed in virtually all religions?

lt’s hard for me to understand human beings, though 1 keep trying, but it is even harder to understand their religions. I can only talk from
my own experience. My body has always been my instrument. It is my religion and the vehicle that makes me travel. It is an unusual packaging, mobile, sometimes insipid, bland, yet other times brilliant. One thing is the mind, and another very different thing is the body. And, although everything is in the head, I believe that man is closer to irrationality than to any other thing. life itself and the context we find ourselves in determines us to be or act in a certain way. We are predictable, a term I detest. We have been trained long before our arrival into this world. Freedom doesn’t exist, we are locked in a body, filled and overwhelmed with suspiciously personal ideas. Only if we are aware that freedom is a utopia will we begin to that things might start to work. We are utterly adulterated, and I think that being able to recognise it is at least a beginning.
Personally, I allow instinct to act. When 1 have a project, I set in place a number of creative cedes that act as alarms, focusing the attention on something I had never noticed befare. We feel a sudden curiosity for people, objects, or words. For the most unexpected things. lt is a sort of fragile and unconscious search for surprise. l’m afraid that, without it, nothing would make
sense. Discovery and astonishment are definitely necessary.

All that artistic process is closely related with performative practice. Have you ever carried it out in public? (Obviously, I mean in front of an art audience). All in all, your shows are usually accompanied by images reflecting your modus operandi.

I defend the privacy of this process and of its never-ending protocols. However, I am interested in the occasional unveiling of some images. I believe that it acts as a sort of complement for the spectator. The photographs of the process enable connections that manage to unsettle and shake the mind of the onlooker.
I have included this type of images in catalogues, and sometimes in spaces befare entering the show proper. .. In “Exvotorio” I
prefer to reveal my modus operandi making it visible on the façade of the hermitage, and I have created a neon light that speaks, precisely, about one of the many moments of the creative process.
The answer to the first question is yes: I have carried out my working process in public. As you can imagine, I can’t remain submerged taking photographs or videos of my own body as in so many other occasions. No matter how prepared those unexpected voyeurs come to see anything -something that we could call exotic or curiousthey will always be struck by the reality of the absurdity of contemplating it live. I don’t want the spectator’s journey to be limited to the dialogue created in front of a piece.I want the images of the process to show him or her my studio, to allow them to get under my skin and Iwant my parallel reality to suck him or her in just as matter captures my body.

Your intervention contains a typically Baroque stage design, with the neon light on the façade announcing and promising something different from what it is later on view. Could you describe this work?

The Baroque style was concerned with enhancing the dramatic effect of light. With the light outside my intention was none other than attracting the attention of passers-by. Religious spaces are places for release and withdrawal. In the interior, the chapel of light is part of the work, being switched on and off in an infinite loop. When the light is on, it is as if the pieces leed from it. And with the use of the verb “feed” it is not a more or less accurate metaphor: this is really the case. When the light is off, the pieces spit out, vomit, all the light they have been exposed to. The light enhances the dramatic effect of the ex-voto pieces, now transformed into a kind of miraculous apparitions. That could indeed be a meeting point with the Baroque. 1 sincerely believe that I’m not the best suited to answer the question of how Objectual, Baroque or Minimal Art influence my work.I think it is up to the critics to establish possible analogies or differences that may exist with any movement. Under no circumstance do I attempt to make any kind of stage design. All the faces are my own. Nor a m I interested in superbly rendered details.
I am not tormented by resemblance because it corresponds to the very process of creation to decide when something is completed. I use my torso, my face, any part of my body like those who use a blank canvas. And when my moulds are ready, I begin to work on them, without forcing them at any time. The density is gradually increased according to the requirements of each piece.(…) 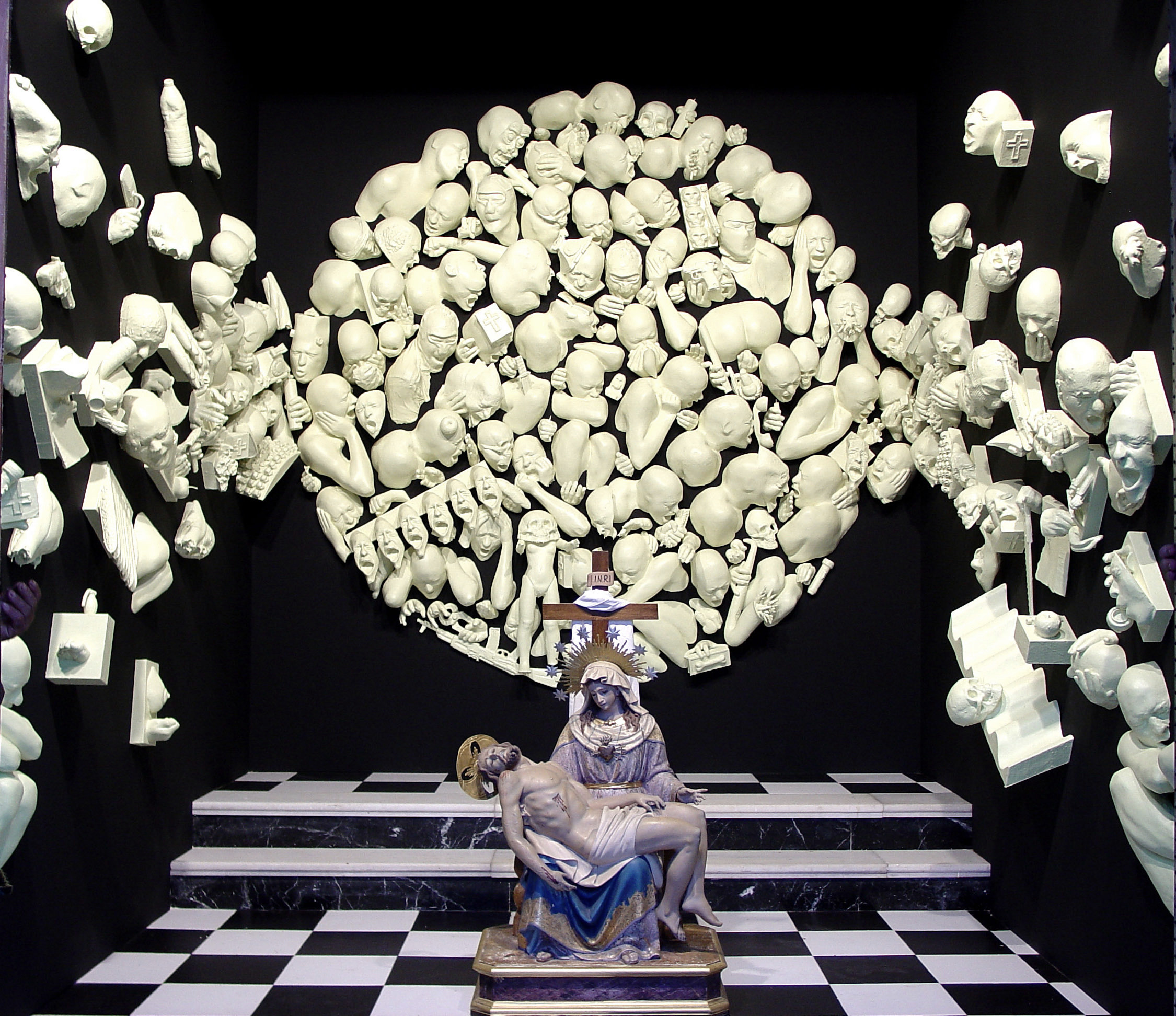