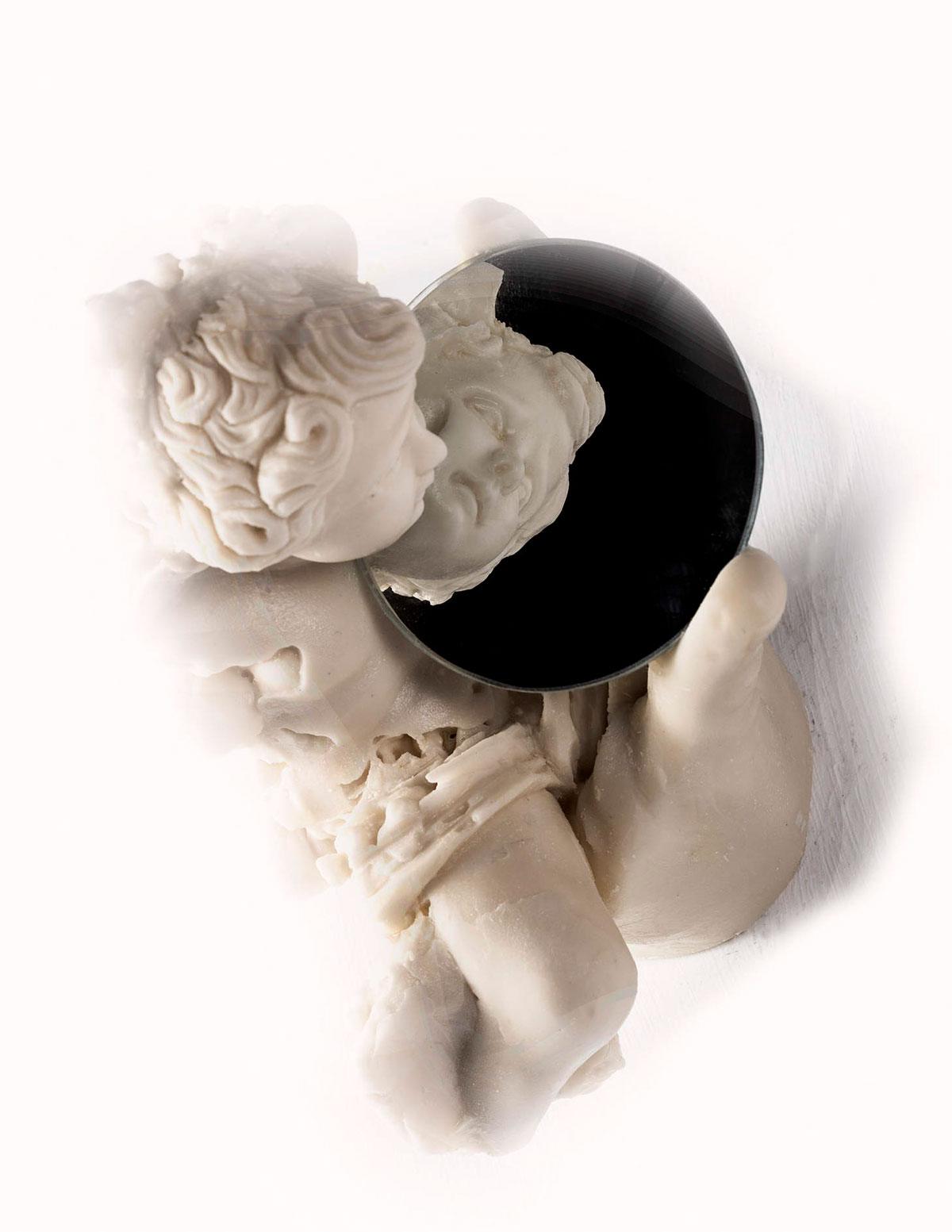 The theoretical themes I have brought up in this text through that second, close look at Lidó Rico’s sculptures all come together in what is probably his most monumental work. I began with this work, it was the first I got to know, and now I will end with it. The trajectory from beginning to end is not linear; that is why I preferred to call these sections fragments or reflections. In loyalty to the non-linear exhibition in a non-linear space, but also to the sense of a dialogic temporality, I will end on a short reflection on time, in what I have called pre-posterous history, by a return to El soplador, circling back to the beginning. The sculptural work strikes most forcefully by its heterogeneous multiplicity. Although we recognize figures we have seen before, the composition, the spatial arrangement, the color, the shapes, and the materiality: it is all distinct from the other works. It is installed differently, and it suggests a narrativity the other works don’t intimate at all. Nor is it easy to consider it abstract, even in the qualified sense I have proposed.

Here, we see innumerable figures, and in the installation some of them even escape from the unified materiality of the sculpture, breaking away from it and turning the sculpture into an installation. A mass of figures, mostly putti, those baroque little angels, but also statues from ancient Egypt, Maya, Greek cultures, a gigantic key, and pieces of jigsaw puzzles, all figurations we have also seen in some of the other works, populate the stream of “air” that the gigantic head blows out or, when thought in terms of mutuality, inhales. The work’s title suggests movement, liveness; the figure is doing something. The preposition “between” holds for the multiple dimensionality, the instability of scale – the enormous human head and the small angels – the temporality – between contemporary and baroque – and the moods – the disgust of the seemingly vomiting large figure, and the active, smooth-skinned angels, some smiling, some looking angry. The stream of small figures coming out of the main figure’s mouth also lends itself to a movement in-between that goes in both directions. The icons of the past, if entering the mouth, come back to the present, and thus can stand for the “pre-posterous history” in which past and present exchange places, mutually meeting, instead of going in one direction.

On the one hand, the temporality, between past and present as a two-way street; on the other hand, the questioning of the “stillness” of the allegedly still sculpture. Moreover, there is an insistent ambiguity of colour, which invokes painting: the monochrome aluminum of the materiality is altered by the traces of blue. At first sight, this blue evokes the patina bronze acquires over time. But, as we are now accustomed, even for the color a second look is necessary. For, it is the “wrong” color. Patina would be greenish, and as a color, almost invisible; just a sign of time, of the long duration of sculpture. The blue, in contrast, enlivens the sculpture as well as unifies it. It takes it out of its self-evident durationality, by means of the ostentatiously “wrong” color. Moreover, it evokes the sky, or the sea of which we have seen those awkward slices in Achicadores de cielos. Both sky and sea introduce the endlessness of the universe into the suddenly small-appearing exhibition space. They promise the voyage that the exhibition’s title holds in store for its activated visitors.

The dubious notion of the “stillness” of still images, in this sense, matches the “moving” aesthetic of baroque sculpture. I cannot help seeing Gian Lorenzo Bernini here as the temporal “other”, the one Lidó Rico is beckoning to join him in the present. Bernini created tangible flesh out of hard marble; as well as running figures and ontological transformations. He was perhaps the first sculptor to whose work’s material the qualifier “hysterical” would apply. Lidó Rico makes his large figure glued to, imprisoned in the wall, yet actively involved in an action of blowing, or, to put it as an in-between action: respiration, in and out. The almost frantic movement of the happenings in, and the event of seeing this sculpture, makes the notion of the still image highly questionable indeed. Henri Bergson’s 1896 book Matter and Memory cited above states that perception is not a construction but a selection. The perceiving subject makes that selection in view of her own interests, as a form of gathering in duration. Perception is an act,of the body and for the body as it is positioned in the midst of things to select from, in the now of the act of perception. Hence, this selection takes place in the present. Not only the interests of the perceiver motivate it, but also her memories. The multitude of small figures, only readable on the condition that we abandon the idea of reading for coherence, and instead go for the force of the figural, can be considered a collection of cultural memories of world-cultural diversity.

This is, then, the participation of the body of the viewer. Hence, texture, colour, and dimensions matter as much as figures, space, and perspective; this is the relevance of the materiality mentioned above. Perception is an act of the present. This might entail a naïve presentism – a narrowing of time to the brief moment of now, a temporal selfie – if it wasn’t for the participation of memory. Occurring in the present, perception needs memory. Since it is the subject’s interest that motivates the perception-selection, an image that is not infused with memory images would make no sense. Nor would it have a sensuous impact, since we perceive with as well as for the body. This is why the body also remembers. Lidó Rico’s figurative artwork, quite “mad”, can in this sense be seen as alluding to Miguel de Cervantes’s allegedly narrative but in fact quite incoherent novel. The dreaming up of giants alludes to that.

Similarly, and due to the figural as our new artistic language, Lidó Rico’s sculpture is hard to capture in a description. This difficulty invokes the fact that the kind of contemporaneity at stake in this work is not at all bound to figuration. In older work I have made a strong case for the “Caravaggesque” narrativity of supposedly abstract paintings by American painter David Reed. I described that narrativity as “second-person” because of the way the paintings, with no figurativity whatsoever, reach out, through suggested volume, to the viewer. Reed’s paintings, like Lidó Rico’s wings and flight dialogue, are visually saying “you”. The Bernini-appeal of Rico’s installation is comparable, in this precise sense, with Reed’s Caravaggism. The sensuousness, or what psychoanalyst Christopher Bollas would probably call “sensual intelligence”, analogous to his concept of “intelligence of form”, of both Reed’s and Lidó Rico’s work matters more, for the production of contemporaneity in the sense I find important here, than the figuration of the gigantic but clearly unhappy blower and the small, mischievous putti.[1]

One issue that this artwork is clearly deeply engaged with, and that binds the two “inter-ships” of time (pre-posterous) and media (figural) together, is scale. The striking discrepancy between the large head and the small things that exit (or enter) it is further complicated by other discrepancies. The pieces of the puzzle that pop up here and there have almost the size of the angels’ heads. A head looking like a small version of the self of the soplador intervenes in the cheerful stream of putti, smaller than they are. A key that is much larger than the angels sits forbiddingly on a plain, a baroque cloud, near the large-seeming leg of one of the putti. But in case we think they are all more or less the same size, the lower angel, barely having ground under its dangling feet, is holding a small simulacrum of itself in its hand, and looks at it with astonishment. Scale is, of course, an element of space. In Lidó’s installation it becomes the bearer of the space’s performativity. In its incongruity, it is also a mode of questioning the abstraction-figuration distinction. As it happens, scale is a typical question in baroque sculpture as well. This is one of the many ways this contemporary work beckons the historical Bernini. Thus, the play with scale leads us inexorably to the issue of time, intertemporality, and the rejection of the linearity that we are used to endorsing without thinking.

And since this multitude of beings of which our contemporary world consists is swallowed or expulsed by a self-portrait, and the self-portrait is so omnipresent in the work that it becomes iconic, I would like to give the artist with his figures together the last word. Lidó himself has beautifully commented on this work. In a presentation for its first display, in December 2019, he stated that:

The man breaks his size at the same time that his scale is magnified, turns on himself and in a frozen gesture he blows, expelling new destinies. The angels populate that exhalation full of symbolic elements that speak to us using pasts to predict future unknown, their self-absorbed faces who were expelled from the celestial are filled with a melancholy that screams, is surprised and strives, betraying their concern for that one handhold reduced to the earthly.

Just keep looking, closely, and reading, as grazing. I rest my case.

THE FIGURAL AS ARTISTIC LANGUAGE